Warning: Parameter 2 to wp_hide_post_Public::query_posts_join() expected to be a reference, value given in /home/warwal/public_html/wp-includes/class-wp-hook.php on line 287
 Edna Griffin: The Rosa Parks of Iowa | The Warrior

Known as the “Rosa Parks of Iowa,” (before there was a Rosa Parks), Edna Griffith would turn the city of Des Moines on its ear when she launched a boycott and sit-in protest at a local eatery in 1948.

Griffin, who was born in Kentucky, grew up in New Hampshire as the daughter of a dairy-farm supervisor. She graduated from Fisk University in 1933, married a doctor, Stanley Griffin, and became a schoolteacher. During World War II, she served with the Women’s Army Corps. The couple moved to Des Moines in 1947.

On July 7, 1948, Edna Griffin, John Bibbs, Leonard Hudson and Griffin’s daughter, Phyllis, were refused service at Katz Drug Store in downtown Des Moines. A waitress took their order for ice cream but after she was told not to serve them, she reported that they don’t serve colored people. 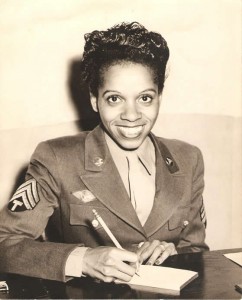 Requesting to talk to the manager only confirmed the denial of service at that establishment.

Griffin launched a campaign to force Katz to serve African Americans by leading boycotts, sit-ins and pickets. She also created the Committee to End Jim Crow at Katz.

She, Bibbs and Hudson filed civil suits against Katz and were represented members of the local NAACP. The Polk County Attorney’s Office prosecuted the Katz manager, Maurice Katz, under the 1884 Iowa Civil Rights Act which prohibited discrimination in public accommodations.

Griffin testified against Katz in the criminal case and the manager was found guilty by an all-white jury and fined $50. The Iowa Supreme Court upheld the conviction in 1949. As a result of the civil case, a jury awarded Griffin $1 in damages. Still, the efforts of Edna Griffin in the Iowa Supreme Court case made it illegal to deny service based on race.

Throughout the remainder of her life, Griffin continued to be an activist and participated in numerous protests including leading a march from Ames to Des Moines in mourning the killings of the four Birmingham, Ala., children killed in a church bombing.

In recognition of her efforts to fight for justice, Griffin received many awards such as the Community Service Award from Blacks in Government (1993), Urban Dreams’ Trailblazer Award (1998), and the Christine Wilson Medal for Equality and Justice (1998). Griffin was inducted into the Iowa Women’s Hall of Fame (1985) and the Iowa African American Hall of Fame (1998).
She passed away in February 2000.